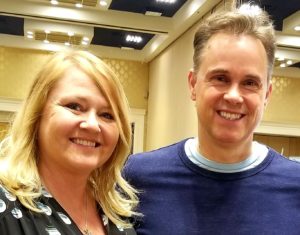 Here is a great picture of Victoria Johnson with Robert Holden at the recent Hay House Live Event in Las Vegas this November! Robert Holden PhD is the Director of The Happiness Project and Success Intelligence. His innovative work on psychology and spirituality has been featured on ‘Oprah’, PBS Special called Shift Happens!, and in two major BBC-TV documentaries, ‘The Happiness Formula’ and ‘How To Be Happy’, shown in 16 countries to more than 30 million television viewers. He is the author of the best-selling books Happiness Now!, Authentic Success (formerly titled Success Intelligence), Be Happy, Shift Happens! and Loveability.